Read the full review in the August, 2010 issue of Stereophile, appearing on newsstands now; or purchase from Zinio.
Channel D Pure Vinyl reviewed in Enjoy the Music by Nels Ferre 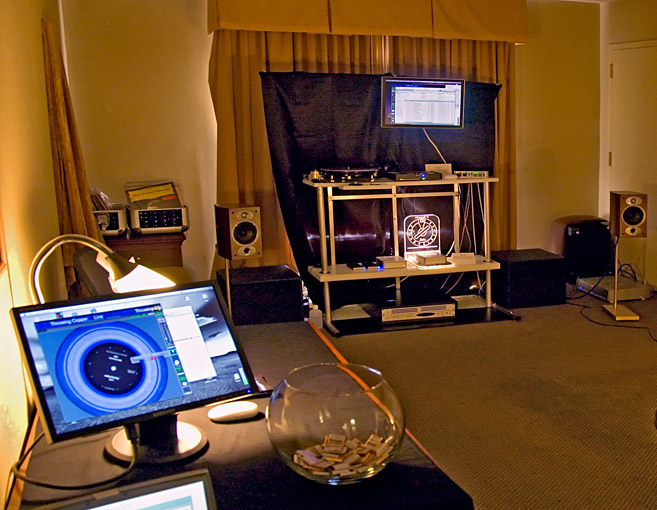 Note: this comparison was accurate as of the date it was posted.
The feature set of the other player was changed in a newer release, and an up to date comparison can be found here.
Information obtained from software documentation (and developer input, if not already available in current documentation).

@ direct quote from developer
@@ comparison of companies' top products; a comparison with the cheaper (but still more expensive than Pure Vinyl), feature-limited version of the other company's software would show a greater disparity in features

* For reference, Adobe Photoshop CS 7 is 45 MB. Pure Vinyl was designed and built from scratch, for the specific purpose of two channel recording and playback, and does not contain unnecessary parts (such as support for "up to 48 tracks of real time audio," according to the developer of the other application).

** Easier to comfortably audition the demo

*** Both the Player software and iTunes are playing the track at the same time, so the computer is doing twice as much work. (It doesn't matter that the iTunes volume is turned down, iTunes is still playing the file in tandem with the other player, placing extra burden on disk or network I/O and the CPU.) "Playlist Mode" circumvents this problem, but direct iTunes playlist interaction and control is not possible in this mode, which also requires performing additional steps (selecting a playlist or a group of songs, then activating Playlist Mode), which is unnecessary with Pure Vinyl's design. 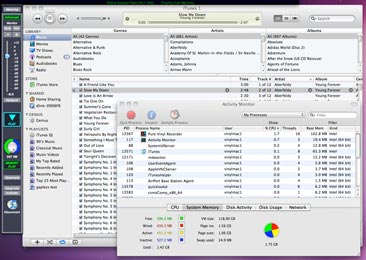 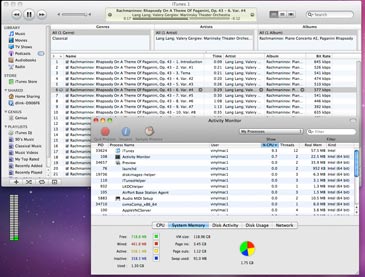 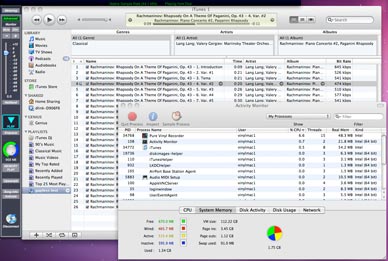 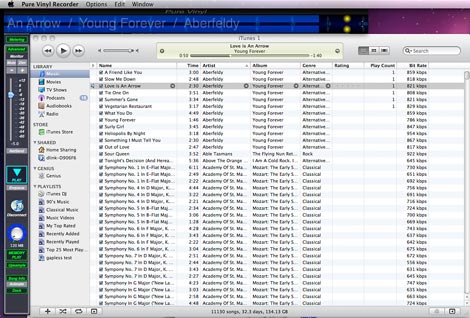 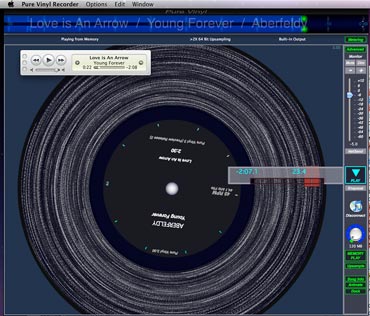 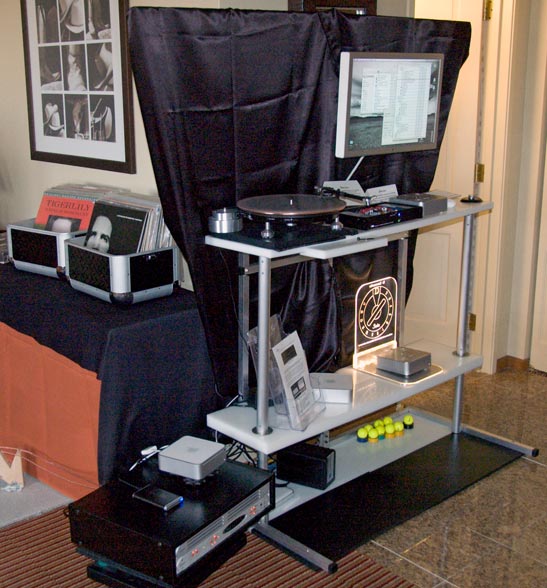 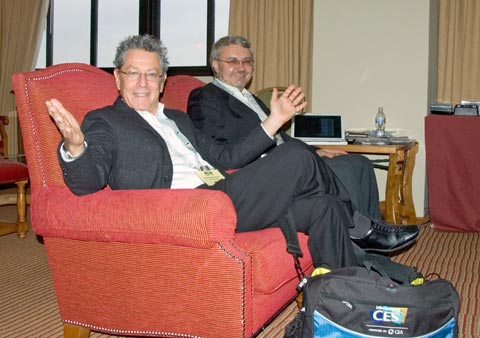 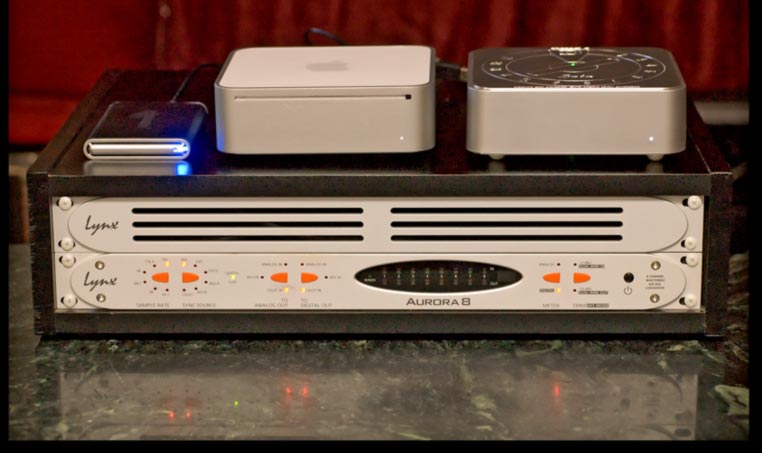 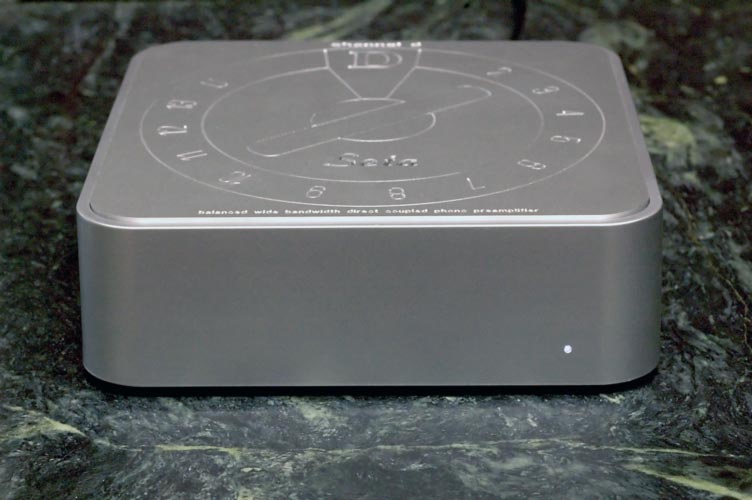 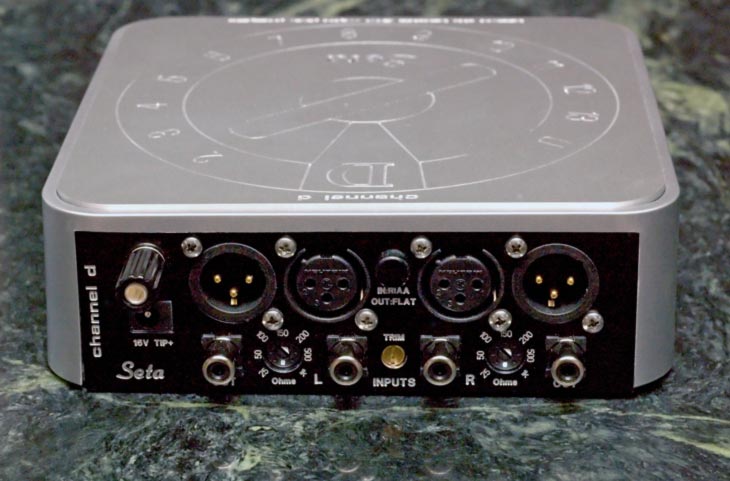 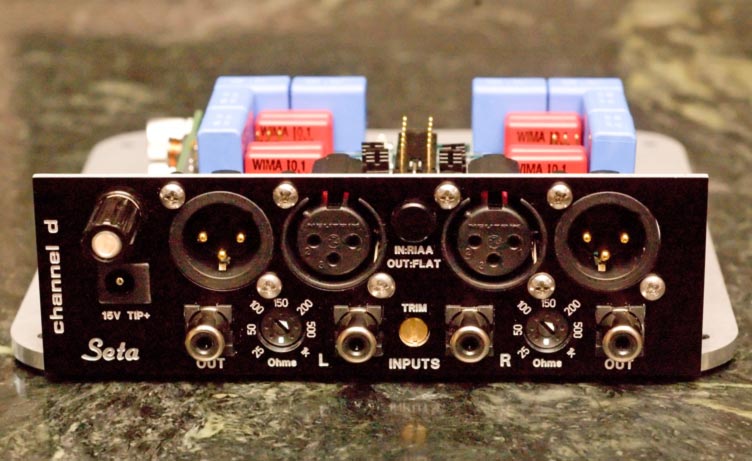 Photo of the rear panel of the new Seta Nano, sans outer enclosure.

There's a lot going on under the hood (that will be revealed in exactly two weeks)...

Included in the article is a screenshot of the forthcoming Pure Vinyl 3, showing the new feature for optionally incorporating scanned or photographed label art onto the "virtual vinyl" image.

These audiophile packages may optionally include a Mac Mini or MacBook Intel Core 2 Duo processor computer, pre-configured with Channel D Pure Vinyl software for RIAA correction. Just plug and play with your turntable and audio system! The availability and configurations for these turn-key, simple to set up plug-and-play packages will be announced.

Pure Vinyl 3 is scheduled to ship 1st Quarter 2009. Features include closer integration between recorder and editor, a completely rewritten editor, and much more. Pure Vinyl 3 will be a free upgrade for all Pure Vinyl users. 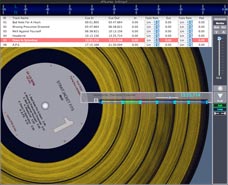 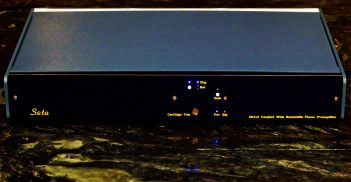 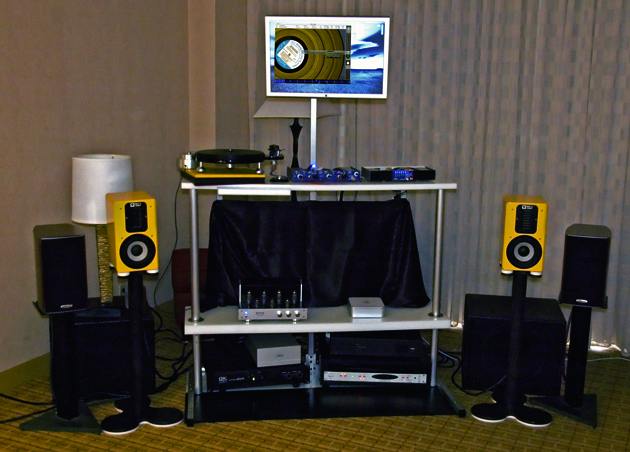 (Above) Photo of our audio demo at Rocky Mountain Audio Fest 2008.

In 2008, we decided to use accessible (in price) loudspeakers to demonstrate the high quality of vinyl source material and Pure Vinyl's software RIAA correction. Comments from attendees were such as "I have a $150,000.00 sound system, the sound quality of your demo was incredible, and makes me re-think what I have now."

Slides from a technical "white paper" on software RIAA equalization, presented at the 123rd AES Convention, may be downloaded here. A copy of the accompanying paper will be made available soon.

Pure Vinyl 2.1 released! A free update for all users.

And... stay tuned for more information about the Seta preamplifier. Revised specs and features. The wait will be more than worth it...

Pure Vinyl 2.03 is released. A free update for all users.

*with the purchase of a Pure Vinyl activation code

A lot greater, in fact (how much, exactly? We'll save that information for later).

We're extremely pleased, and have made extensive measurements (with all potentially bandwidth-reducing input and output protection circuitry in place, of course), that we'll be posting very soon, in advance of our shipping of this ground-breaking phonograph preamplifier. At that time, the specifications, compared to the original October 12 news release posted below, will be (favorably) revised (corresponding with the results from these tests).

In addition, we have a couple of important surprise announcements planned for the time of the shipment of the Seta. 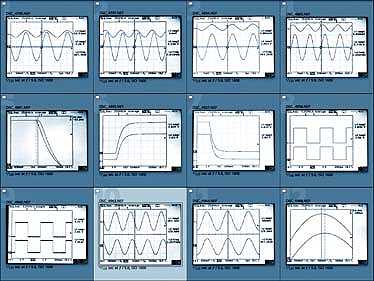 Click on the image above to see technical measurements of the Seta preamplifier.

Why be concerned with reproducing a bandwidth exceeding the conventional 20 kHz audio range? Does audio reproduction involve megahertz frequency signals?

The short answer is: No. But, phonograph music reproduction is slightly more complicated.

The long(er) answer is that the signals from a vinyl record are pre-emphasized: in other words, the high frequencies are boosted by as much as 20 dB (10 times). This stresses preamplifiers to a higher degree, in the frequency range where preserving signal integrity is at its most difficult. Unfortunately, distortion in the upper octaves can cause intermodulation distortion that also affects the critical midrange, creating what's best described as a subtle "haze" that obscures vital musical details. We have confirmed this during several years spent in developing this product, involving extensive listening evaluations beginning with rudimentary but surprisingly capable "jelly bean" op-amp designs, then finally evolving into a hybrid topology culminating in the Seta preamplifier design, with a bandwidth of well over 1 MHz, even at high gain settings.

What's more, the frequency response of vinyl is much wider than the "20 Hz to 20 kHz" response of human hearing. Recordings that push the limits of the upper frequency range of vinyl bandwidth are more common than you may realize. This is especially true of well-recorded "audiophile" recordings, for which extra care has been taken in the mastering process. Here is an example of an analysis of the frequency range of such an audiophile remastering, focusing on a recording with high-frequency percussion sounds. In that example, the energy above 20 kHz will prove troublesome for narrow-bandwidth preamplifiers, intermodulation distortion producing a noticeable, hard midrange "splat" or crunching sound, distracting the listener from the reproduction of the crystalline bell's sound...

Finally, the audibility of one of the most maligned deficiencies of vinyl, those irritating "pops and clicks," is a function of and can be exacerbated by the design of the preamplifier. The reason is that the transient signals caused by the stylus striking a scratch or foreign object in the groove have, in addition to large amplitude, a very fast risetime, and are unlike any musical signal. The fast risetime can cause slewing distortion in traditional narrow bandwidth or inexpensive phono preamplifiers, magnifying the audibility of pops and clicks.

It doesn't matter whether it's a strictly linear gain stage like the Seta, to be used with our Pure Vinyl software; or a linear gain stage followed by standard passive RIAA phonograph equalization (as in many conventional - and high end - phonograph preamplifiers). The same principles (and limitations) apply.

In other words: a preamplifier, such as the Seta, that's capable of reproducing signals with a bandwidth well over 100 times greater than "typical" audio signals, insures that the preamplifier, when working in the audio frequency range, is operating with significantly reduced strain and distortion - the equivalent of a "straight wire with gain" - which is the ultimate goal of all "audio" amplifiers. 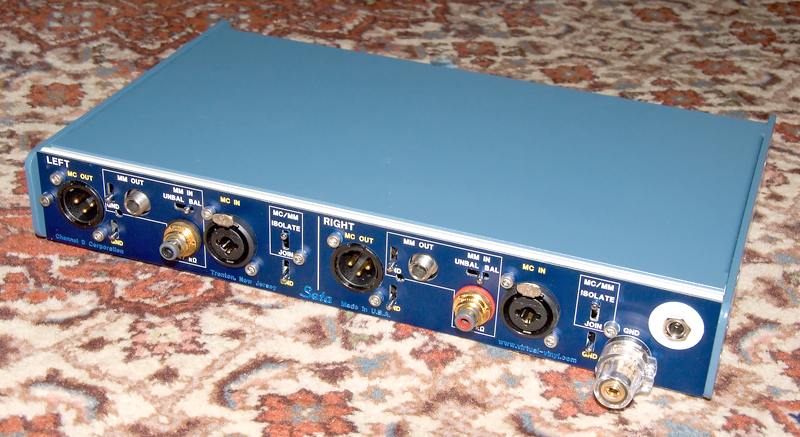 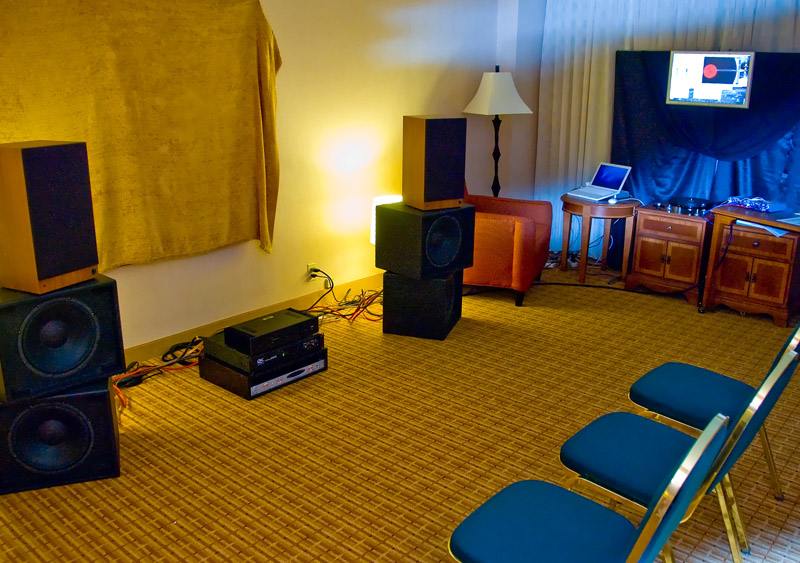 Thanks to all of our Pure Vinyl users who made the trip to Colorado and dropped by to say hello, and listen to our new Seta phonograph preamplifier; and all of our new friends who took the time to have a seat and listen!

Read what Adam Goldfine of Positive Feedback said about the Seta in their Rocky Mountain Audio Fest show report (scroll to end of article): http://www.positive-feedback.com/Issue33/rmaf_ag.htm

Read what Marja and Henk of sixmoons audio said about the Seta in their Rocky Mountain Audio Fest show report (scroll about 1/3 of the way down, and includes a photo of the inside of the Seta we used for all vinyl playback at RMAF): http://sixmoons.com/industryfeatures/denver07m+h/denver_6.html

P4-6 Filter Reconstruction and Program Material Characteristics Mitigating Word Length Loss in Digital Signal Processing-Based Compensation Curves Used for Playback of Analog Recordings
Renewed consumer interest in pre-digital recordings, such as vinyl records, has spurred efforts to implement playback emphasis compensation in the digital domain. This facilitates realizing tighter design objectives with less effort than required with practical analog circuitry. A common assumption regarding a drawback to this approach, namely bass resolution loss (word length truncation) of up to approximately seven bits during digital de-emphasis of recorded program material, ignores the reconstructive properties of compensation filtering and the characteristics of typical program material. An analysis of the problem is presented, as well as examples showing a typical resolution loss of zero to one bits. The worst case resolution loss, which is unlikely to be encountered with music, is approximately three bits.
Convention Paper 7185

Note: official reprints of this paper will be provided for the asking at the 2007 Rocky Mountain Audio Fest. Additional copies of the paper will be made available for download pending release obtained from AES in mid - 2008, per their standard Convention Paper procedures. 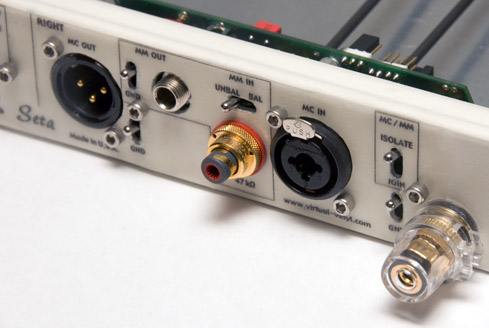 Photos below: playing and listening to music in the Pure Vinyl demonstration room at the 2006 international Rocky Mountain Audio Fest, Denver, Colorado 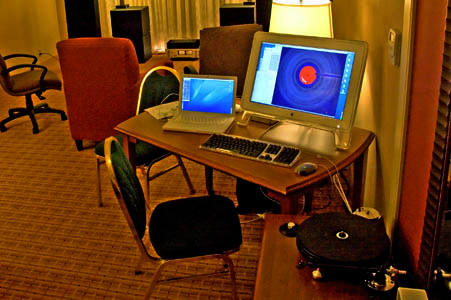 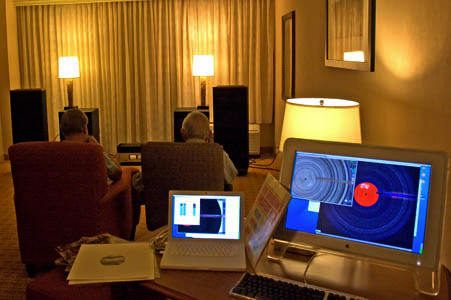